A Conversation with Report For America’s Charles Sennott 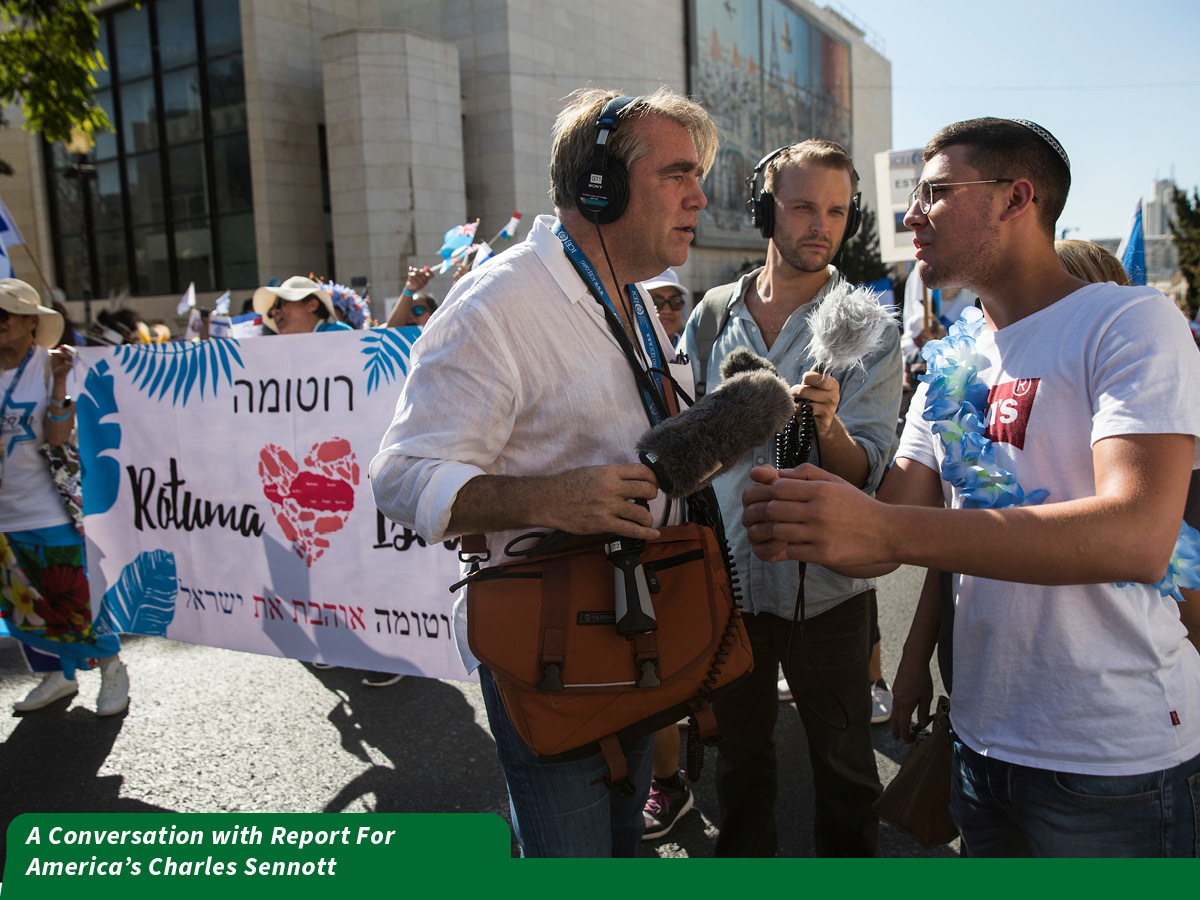 Charles Sennott (left) and a fellow with the GroundTruth Project conducts an interview for a podcast about the rise of Christian Zionism.

In the last two decades, local journalism has taken a beating. With the change in the media landscape from print to digital, the for-profit business model based on advertising revenue has collapsed. Legal changes regarding the consolidation of media platforms- newspapers, TV and radio— have fostered the growth of huge media conglomerates, which insist on a bottom line that put profits ahead of content. Newspapers took the biggest hit: 47 percent of newsroom staff cut; 1800 newspapers shuttered; millions of readers left without watchdogs to report the local news. Comes the latest insult, COVID-19, whose damage to local journalism is only exceeded by its importance to public health. Against this backdrop enter a host of entrepreneurs, bright visionaries with big ideas about how to save local journalism. One of them is Charles Sennott who after an awardwinning 30-year career as journalist turned his attention to repairing journalism, one reporter at a time. Three start-up initiatives mark these attempts, the most recent of which is Report for America, which provides emerging journalists with fulltime experience in local newsrooms that have gaps in their reporting, particularly in minority communities. The program rolled out with only three reporters in January 2018 but in just two years, it has experienced remarkable success, growing its corps of reporters to more than 200 journalists across the country. What follows is a condensed version of our conversation with Sennott, edited for length and clarity.

ON WHAT HIS LIFE WAS LIKE AS A WORKING JOURNALIST

I came out of college with a job at a small public radio station in western Massachusetts. After that, I went to [graduate school at] Columbia School of Journalism and eventually began to work in print newspapers. First, I worked for a regional daily, the Bergen Record in New Jersey and then a big city tabloid, New York Daily News, which is a feisty newspaper. I loved working there. From there, I went to the Boston Globe, where I eventually became the Middle East bureau chief and much of my work had been as a foreign correspondent for the Boston Globe covering the Middle East in places like Afghanistan and Iraq.

ON HOW HE CAME UP WITH THE IDEA FOR THE GLOBALPOST, HIS FIRST START-UP PROJECT

I had been covering a lot of conflicts and war reporting, and it takes its toll. So, I needed to think about what was next for me? I thought, I’m an entrepreneur. I see the future is going to be digital. I see that great American newspapers are hurting financially. I thought I could play a role in creating a new model. So, I joined with another co-founder and the two of us started GlobalPost, [for-profit, digitalonly, international]. As major newspapers started to close their foreign bureaus, we built a team of freelancers and tried to fill the void. We did not want to leave it up to The New York Times and CNN only to be the international correspondents, but we wanted to have more voices. That was the beginning of what we call the GlobalPost.

ON THE SUCCESS OF GLOBALPOST

We had 70 freelance foreign correspondents in confederacy across 50 countries. We did extremely well in building out the editorial team, but we did not have a successful business model. It became apparent that we couldn’t really make a profit by doing quality global journalism on an ad-based digital advertising model.

ON HOW THE IDEA FOR HIS SECOND START UP, THE GROUNDTRUTH PROJECT, EVOLVED

Five years into GlobalPost, I realized we really needed a different formula. So, we incubated a nonprofit approach within GlobalPost called The GroundTruth Project, which has been going on for about eight years, and we have had great success.

ON WHAT INSPIRED THE NAME, THE GROUNDTRUTH PROJECT

I wanted The GroundTruth Project to be based on a very important value, which is [for journalists] to be on the ground to search for the truth. But it also has a technical meaning: Ground truthing is a term coined by NASA. When you are calibrating satellite technology, you have to be very clear and precise about the reading on the ground. This process of calibrating the technology in the satellite with human reading on the ground is called ground truthing. While calibrating, you have to make sure they match in order to know you are getting a precise reading. But if they are in conflict, trust the human reading. And that’s what we are all about at GroundTruth- trusting the human reading.

ON HOW REPORT FOR AMERICA BEGAN

Recently, we launched a national initiative under The GroundTruth Project called Report for America. It’s a service kind of model similar to Teach for America. We are trying to inspire a new generation of journalists by offering them mentoring, support, and funding to get jobs serving local communities. This June [2020], we will have 250 reporters who we support in 160 newsrooms across America. It’s getting traction and growing. We continue to do global reporting fellowships [as part of GroundTruth] but on a much smaller scale. We do about 40 global reporting fellowships a year, somewhere between one month and six months but it’s not a scalable model. It’s much harder to do global fellowship reporting than it is for us to build out the scale that we can reach with Report for America. So, a lot of our effort right now is in Report for America.

I often tell journalists in America who want to do foreign reporting to start locally. And that’s why we have the Report for America program. Cover a city like Dallas, cover a community and get used to it. Learn the trade and craft of how you are going to do your job on important issues. These issues we need to cover here in America are so often global issues like immigration or climate change, which a lot of our Report for America reporters are covering. That’s a global story. There’s no reason you can’t start learning how to cover it right here. Another example is global health. Look at the pandemic we’re facing right now. This is a global story. It is something that we have never seen before. It has woken us all up to the fact that local news is so important. We need trusted, fact-based local reporting to understand this global pandemic. Our thinking is, we have Report for America, which is where you should get your start. Once reporters are grounded [in local news] and have some experience, we will take on some of them to go and do global reporting.

When they are there on the field, we do a lot of risk assessment and training to make sure they have the skills they will need to work safely. But I think some of the threats that journalists are facing now are changing. A lot of these are cyber threats. We are seeing journalists being attacked by trolls. The new frontline for journalists is increasingly making sure they understand they have to protect themselves against cyberattacks and be aware of how they could have social media campaigns against them. So, the peril and the danger are always there physically for journalists in a war zone or covering climate change if you’re in a dangerous area, but I would say, a new area we want to get better at teaching journalists to be thoughtful around is in the cyberspace. 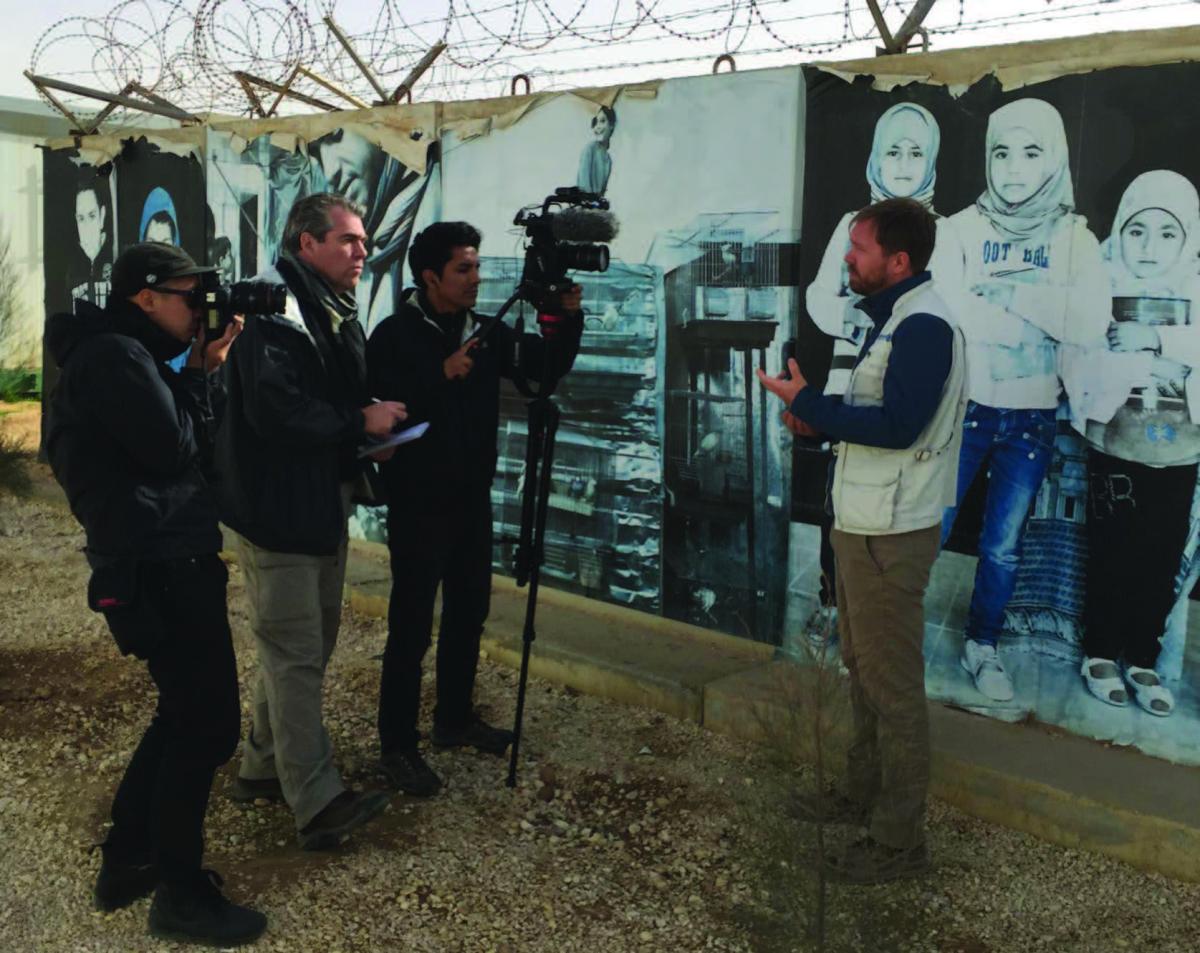 ON WHAT CHALLENGES REPORT FOR AMERICA IS FACING

One of the greatest challenges we are facing in building Report for America is fundraising. As a nonprofit, we can’t just say fund us and create goodwill. So, we had to come up with a model that’s sustainable. We bring half the funding for a journalist to work in a newsroom for a year and then we ask the newsroom to pay 25 percent for that reporter. We ask the newsroom to raise the additional 25 percent in their community to get them invested. So, we can tell the national funders every dollar you give us, we will match with the local newsroom. This has proven to be a good model. Funders feel like they are deepening their investment. Newsrooms get a reporter for 25 percent of the cost and the community gets to feel invested at a reasonable price through a local foundation, a crowdfunding campaign or whatever way the newspaper wants to use to raise money locally. The community gets to know that it is a part of supporting that journalist as well. The journalists, therefore, serve the community and we begin to connect these two.

I think local journalism is vital to serving communities and our democracy. I don’t think it’s too grand to say that our democracy relies on an informed public. I believe most people are interested in the things going on around them in their own communities. In the part of [the country] where you live, you care most about what’s going on there. What’s happening with the school systems there if you have kids or what’s happening with a traffic accident that you maybe saw at rush hour. Or there are break-ins in your neighborhood? What are the police doing about it? Or maybe there’s a city project that you’re aware isn’t working well and you want to know that the newspapers are on it. The watchdogs of our local communities are the foundation of democracy. So, I think local journalism is vitally important and in a deep crisis in the United States. We are hoping that Report for America will become part of addressing that crisis and in [doing so] try to serve a new generation of journalists.